We just posted this on the Goldsmiths Design Blog. I’ve made some minor changes…

Last week the Interaction Research Studio introduced the Photostroller to residents of a care home for the elderly in York.

The Photostroller is an image slideshow device that allows people to drift through photographs drawn from the Internet. Perhaps like daydreaming, the slideshow wanders through streams of images – some related and some more random.

The team took a lot of care in designing the Photostroller for the appropriate level of interaction with the residents. A tuner was designed to enable the residents to tune the slideshow with a dial and slider designed for hands with limited mobility. A moment of wonder for us was seeing a 99 year old arthritic resident handling the controller with relative ease. 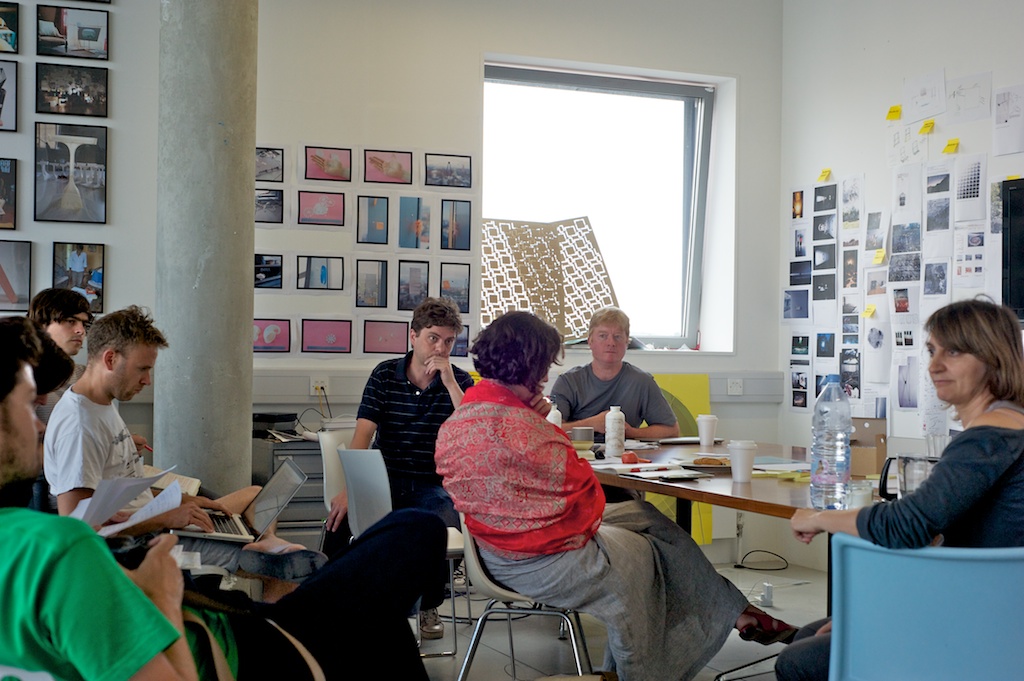 On Tuesday the Interaction Research Studio hosted a workshop on developing research funding bids. The workshop was led by Bill Gaver and featured an overview of the conditions and climate for research funding in the UK and in Europe provided by Justin Davin-Smith from Goldsmiths Research Office. The workshop focused on how to turn an interest or idea into a research proposal, focusing on key elements of the proposal writing process such as establishing a context for the research, defining aims and objectives as well as detailing methods and work plans to form a cogent narrative for the proposed research.

Here’s some useful links from the day’s event:

I’m teaching a workshop at the NORDES summer school 2010 entitled ‘Design and Controversial Things’. Here’s some information about the summer school…

Design deals with things, but what does that suggest? In design practice the things we deal with may be objects, products, artifacts and services, but also assemblages, processes, projects and even parliaments. This diversity also goes for contemporary design thinking, focusing things such as design collaborations as well as prototypes and “matters of concern”. This diversity may be noticed in the etymology of the English word “thing” which reveals a journey from a meaning of an assembly, like the governing assemblies in ancient Nordic and Germanic societies, to a meaning of  “an entity of matter”. In short: How are design things being done in contemporary design practice, thinking and theory.

The Nordic Design Research Conference (NORDES) summer school 2010 is addressing such design theory issues conceptually and exploratory in a five-day course for Ph.D students. Each day will have a specific design thing theme (see below), and each theme will be explored both in a reflective seminar and a performative workshop.

In these seminars and workshops we will address:

Over the past decade there has been an increasing engagement between design and STS. One emerging and novel area of exchange is concerned with exploring the ways in which practices of ‘speculative design’ and STS concerns of publics, participation, politics as well as expectations come together to inform one another, to critique one another, and to collaborate in developing new modes of co-production of contemporary technoscience. Although such associations are promising, they are nascent and in need of articulation and critical examination.

For this track we are soliciting participation from STS scholars, design researchers and practicing designers. Our objective is to present a range of scholarly approaches and exemplary projects in order to critically explore the practices of Speculative Design.

About EASST
The EASST_010 conference is the biennial forum of the European Association for the Study of Science and Technology (EASST) for contributions on topics from the range of disciplines found within science, technology and innovation studies. The particular focus for the 2010 conference is that of practice and performance. Science and technology, are seen as performative domains of the “social”, situated practices rooted and grown in a sociomaterial context.

More About the Track
By speculative design we refer to a set of design practices and outcomes that are moving away from common notions of design as “problem-solving” or “styling”, towards framing design as a means for surfacing and materialising issues and contributing to the formation of publics and futures. In this move, design is increasingly cast as a possible mode of intervention into technoscience, thereby establishing renewed associations with STS. With speculative design the performativity of the object comes to the fore as a concern for both designers and theorists, as its objects and outcomes are often brought into being to, and interpreted as, materially and discursively enacting values, identities, agendas and beliefs. A challenge for STS then is to describe and characterise the performativity of the objects of speculative design in new ways that avoid recourse to the familiar positions and debates concerning ‘the political of artefacts’.’

For this track we are solicit participation from STS scholars, design researchers and practicing designers. Our objective is to present a range of scholarly approaches and exemplary projects in order to explore and outline this field of convergence. Within the track, presentations will be organised thematically.

Key questions we hope to address include the following: